Menu
Relevant for:
Plus 1.75 mmMK2.5MK2.5SMK3MK3SMMU1MMU2SSL1CW1MINIMK2SMK3S+MINI+SL1S
Last updated 9 months ago
This article is also available in following languages:

3D printers work by laying layer over layer of plastic to create a 3D object. Each new layer must be supported by the one beneath it. If part of your model starts in mid-air and is not supported by anything below, you need to add an additional support structure to ensure a successful print.

It is worth considering altering the orientation of the model or splitting the model into multiple parts in order to possibly reduce overhangs and consequently the amount of supports generated.

PrusaSlicer can both detect areas that need supports and generate them in these places automatically.

When the print finishes, depending on the model geometry and material used, the support structure is often easily removable with bare hands. You can use pliers to get a better grip in otherwise hard-to-reach places. A scalpel or a utility knife can also be used to cleanly remove a piece of support that seems to be stuck to the model.

Pieces of supports can be surprisingly sharp and are sometimes violently ejected in a random direction after removal. When you encounter hard-to-remove supports, consider wearing protective glasses (this sounds stupid until you get hit in the eye for the first time).

Supports can grow from both the print bed and any model surface when necessary.

This ensures that every overhang and part starting mid-air will get supported. However, small imperfections may appear on the surface where supports started growing from.

Supports from build plate only

Creates only supports that have their base at the print bed. 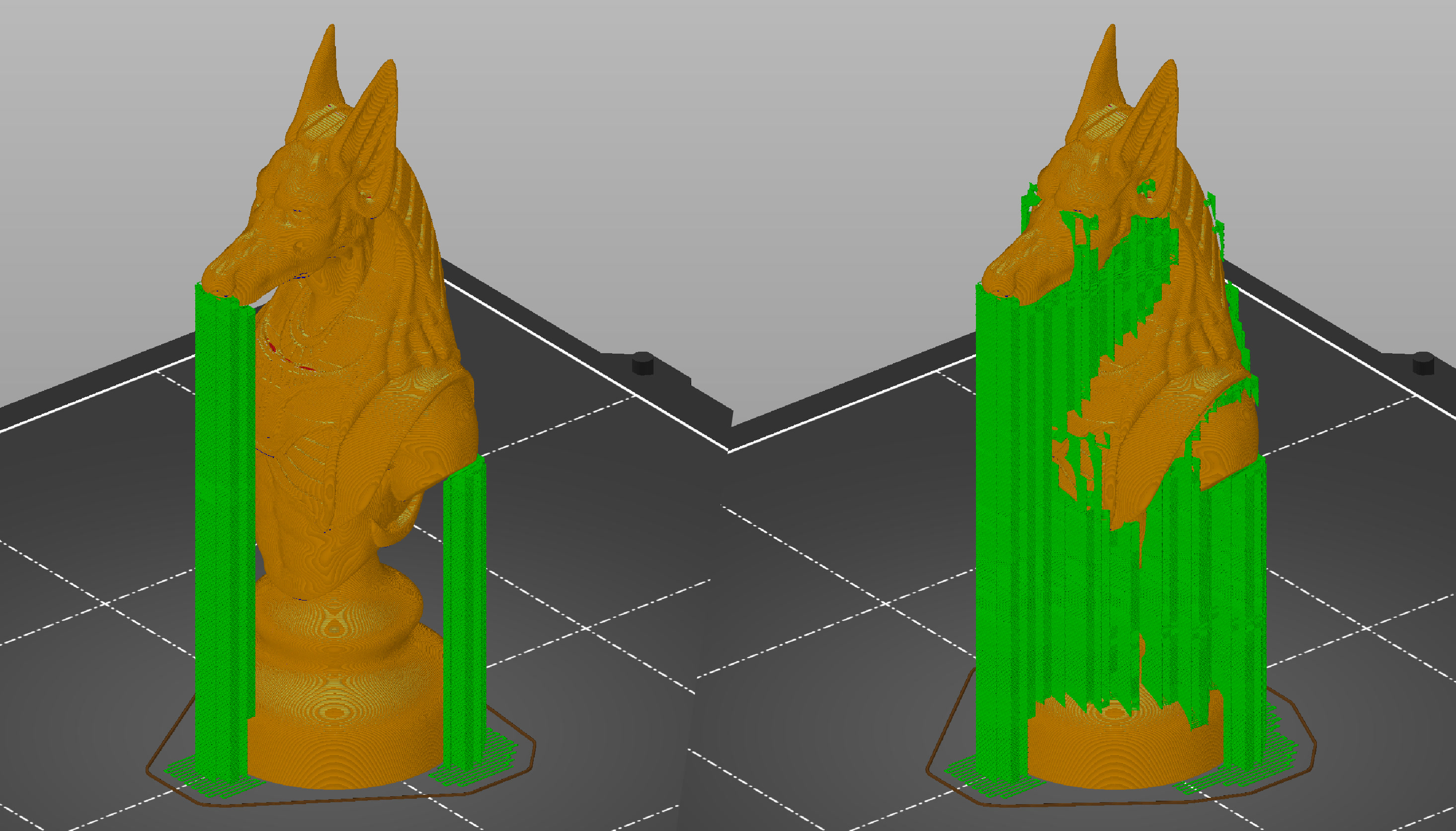 For support enforcers only

It’s possible to print multiple objects at once each with its own support settings. By default, all models are affected by the global settings. You can overwrite them by right-clicking on a model in the 3D view and selecting Support material. Alternatively, you can right-click on the editing icon in the Object list.

A new window will appear in the right panel called Object settings to modify - Support material. Changing these settings will affect only the relevant object and its instances. You can remove the settings overwrite by clicking on the red cross icon. When you do so, the global settings will once again be applied.

The automatic supports can sometimes appear in hard-to-reach places, resulting in a tedious removal of support structures. If you think such a part of the model could be printed without supports, but neither the Overhang threshold setting nor selecting Supports on built plate only helped, you can adjust supports manually.

Starting with PrusaSlicer 2.3, you can also use Paint on supports.

Right-click on a model and choose either a Support blocker or Support enforcer.

Expert mode - Option to load external geometry as a blocker/enforcer

Support blockers and enforcers can be manipulated with the familiar Move, Rotate, and Scale tools. You can also quickly duplicate them with copy&paste.

Support blockers are useful when you’re generally happy with the automatic supports and you simply want to remove some of them. Focus on placing blockers where the supports meet the object, the rest of the support structure below will be removed automatically.

Support enforcers are great in situations, where only a few parts of the object need to be supported, but the automatic algorithm places supports all over the model. In this situation, don’t forget to switch the support mode to For support enforcers only.

It’s less common, but you can also use support enforcers with the automatic generation on.

Another interesting use of support enforcers is to split long bridges into smaller ones by placing a support in the middle of the bridge. You can repeat this process and print shorter, near-perfect bridges while still making the supports easy to remove.

Some options will only appear when Expert mode is selected.

When off, the overhang detection is off. Only support enforcers generate supports.

The Overhang threshold value represents the most horizontal slope (measured from the horizontal plane) that you can print without support material (90=vertical).

Changing this value is a quick way to adjust the amount of generated supports.

The lower the value, the less support will be generated. 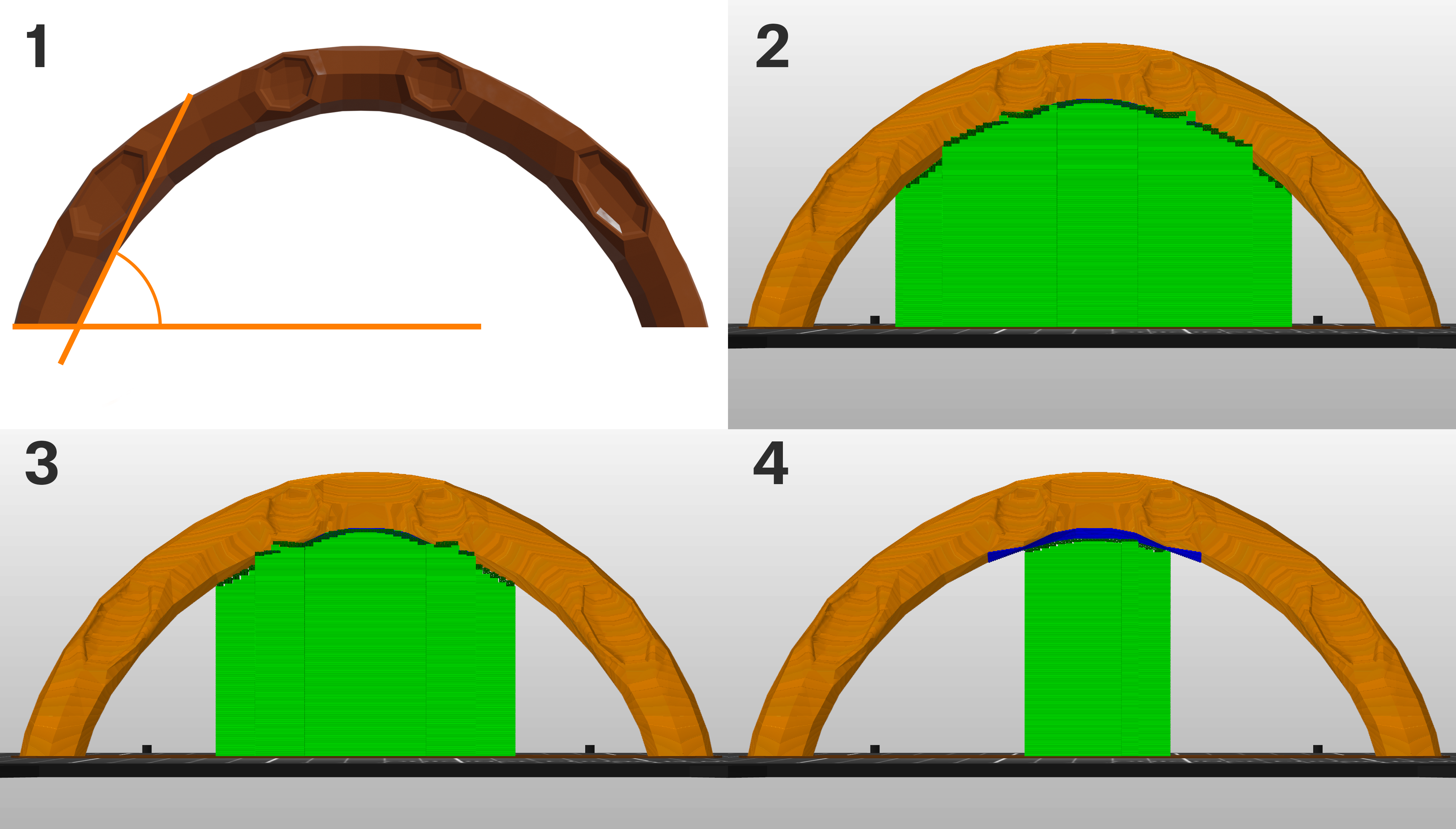 Enforce support for the first 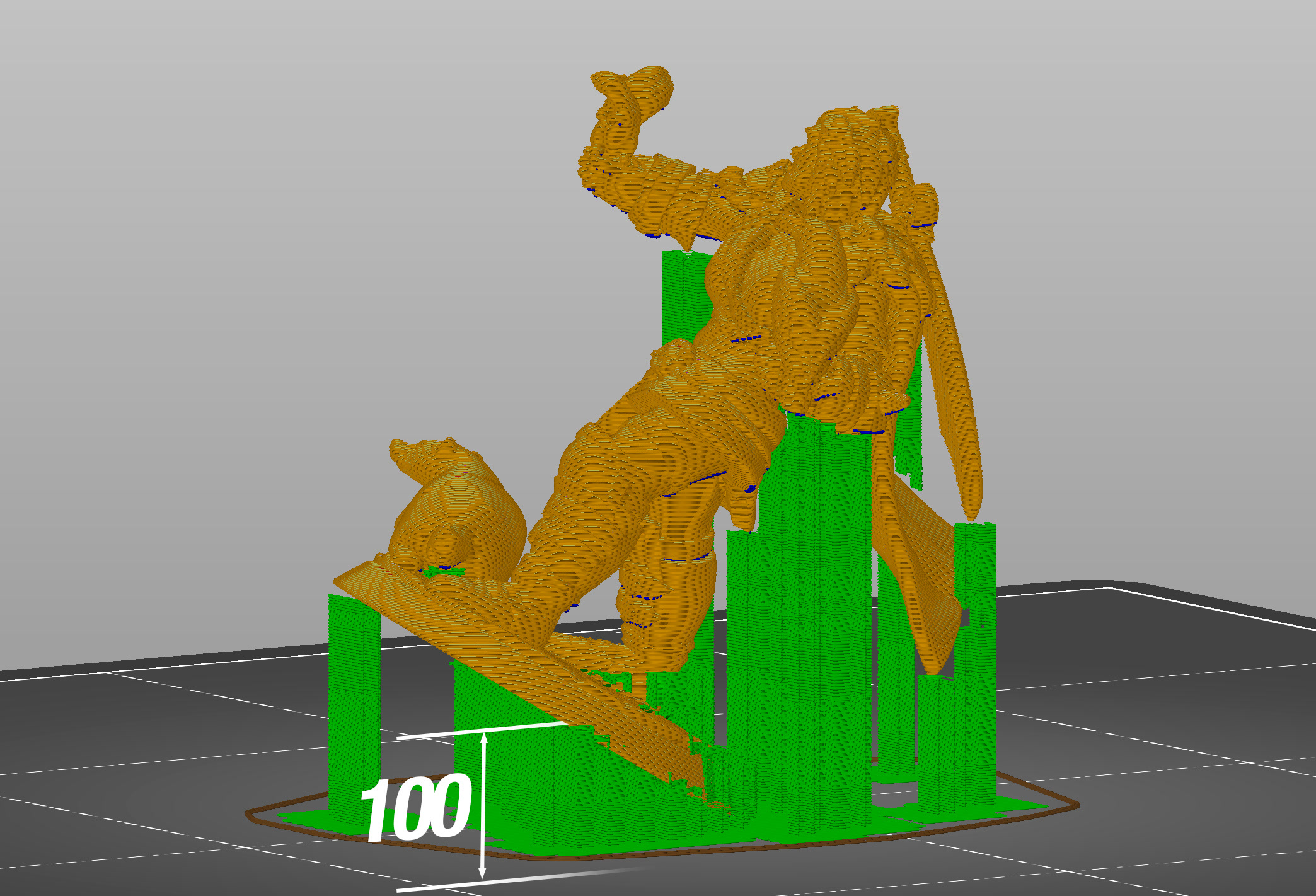 Enforce support for the first 100 layers

The object will be raised by this number of layers and support material will be generated under it. When the print finishes, you can grab the raft and peel it away from the part.

The vertical distance between the raft and the object. Ignored for soluble interfaces.

Expansion of the raft in the XY plane for better stability.

Style and shape of supports. The default Grid supports have a very well-defined minimum area, making them very stable. However, they tend to leak out of regions they support along the walls of the object. The Snug supports maintain the shape of the overhang, so they do not leak to the walls. The trade-off is the possibility of lower stability of tall and thin support pillars.

The vertical distance between the object and the support material interface.

Setting this to 0 will prevent PrusaSlicer from using bridge flow and speed for the first object layer.

Values between 50-75% of the layer height seem to work well. 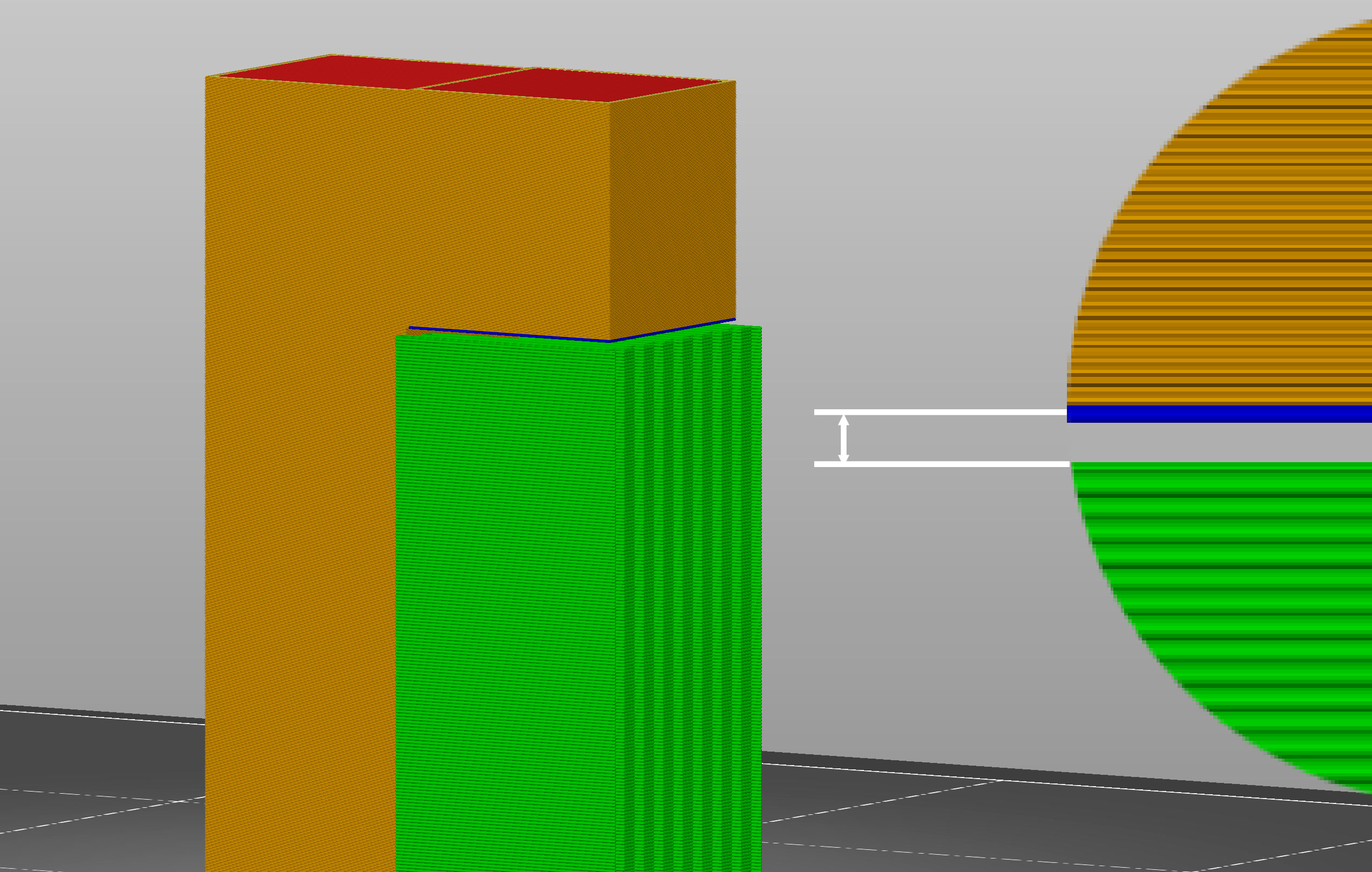 Similar to Top contact Z distance, but affecting the gap at the bottom of the support tower (when supports start on top of a model and not on the build plate).

With sheath around the support

Creates a single perimeter around the supports, which makes them sturdier, but more difficult to remove.

For Snug supports only. Gaps smaller than the closing radius will be filled in.

Interface layers form a more uniform surface between the object and the support material. These are preferably set to a much denser pattern than the non-interface layers so that you can both maximize the surface area of the support in contact with the model to prevent sagging while minimizing print time and material used with a bigger non-interface pattern spacing.

Similar as Top interface layers, but affecting the number of interface layers at the bottom of the support tower (when supports start on top of a model and not on the build plate).

Spacing between interface lines. Set to 0 to get a solid interface.

When enabled, the top layer of supports is covered with loops - continuous polylines.

Support on build plate only

Supports can start only on the print bed. Enabling this option is a really quick way to get rid of excess supports mostly on organic shapes. Make sure to check the preview and verify that all parts are either supported or at an overhang angle manageable by the printer. 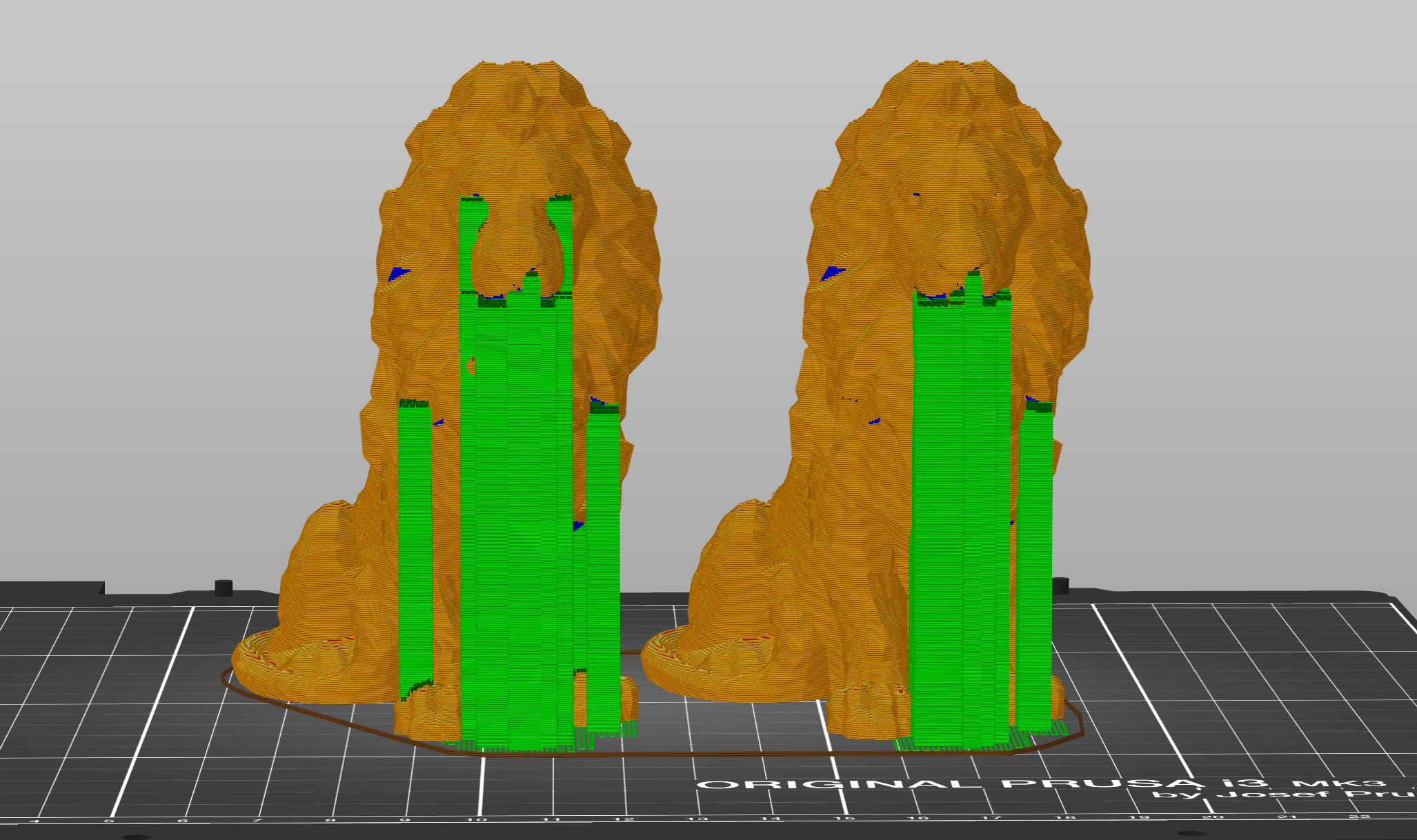 Supports everywhere (left) vs Supports on build plate only (right)

XY separation between an object and its support

Sets the width of a gap between the model and supports. Bigger XY separation decreases the contact area of supports but makes them easier to remove and less prone to fusing to the model.

If expressed as a percentage (for example 150%) it will be calculated over the external perimeter width. 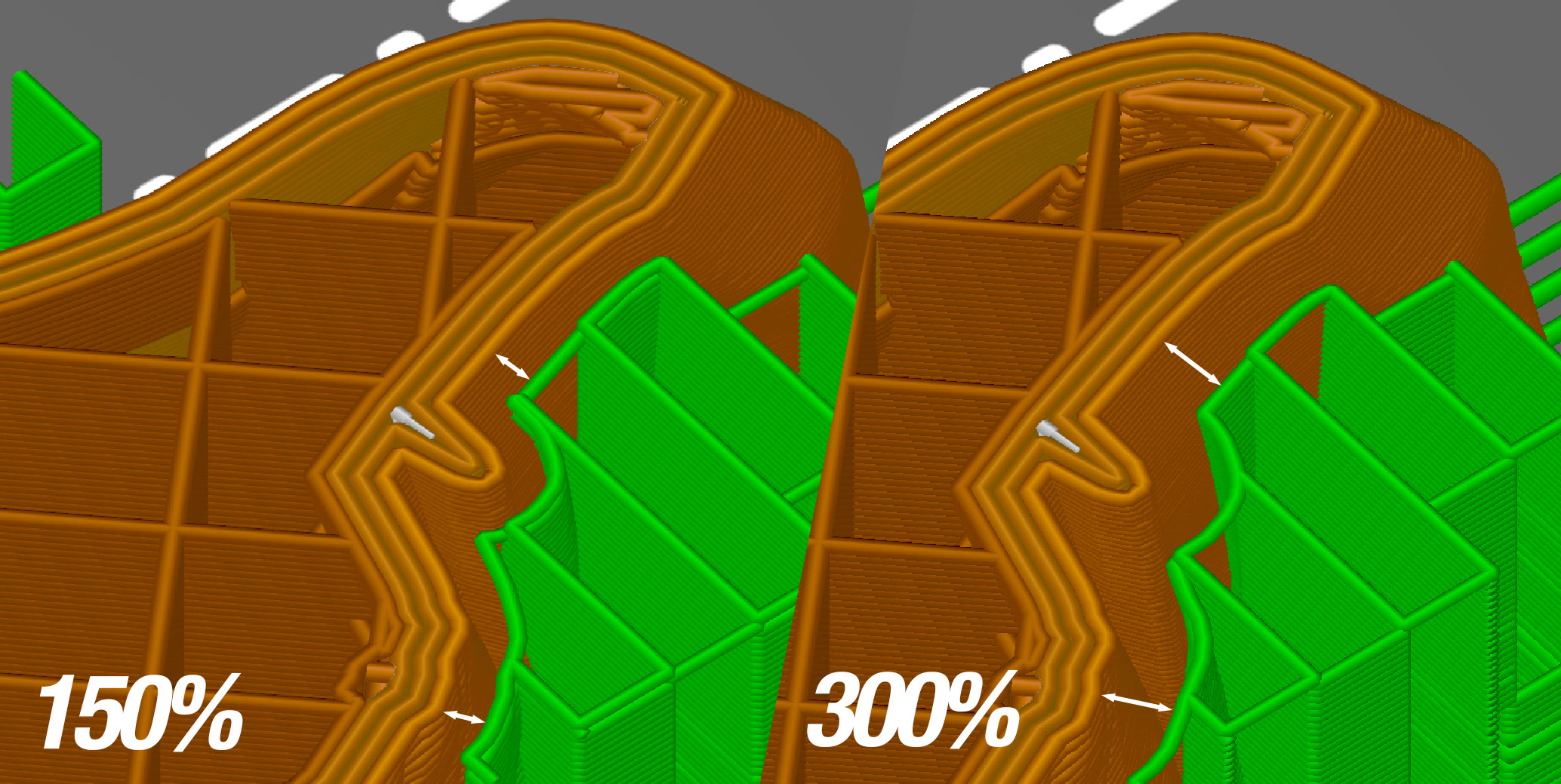 Prevents support material from being generated under bridged areas.

Supports will be printed at equal layer heights as the model itself. This is useful with multi-material printers, where the extruder switch is expensive.

Synchronize with object layers can only be enabled with soluble supports (contact Z distance 0).

Not synchronizing with object layers allows the support layers to grow faster than the object layers (if not excessively slowed down by the cooling logic) and independent layer height also allows PrusaSlicer to follow the gap between the object and the support top surface precisely. We may consider this to be configurable even for non-soluble supports in the future.